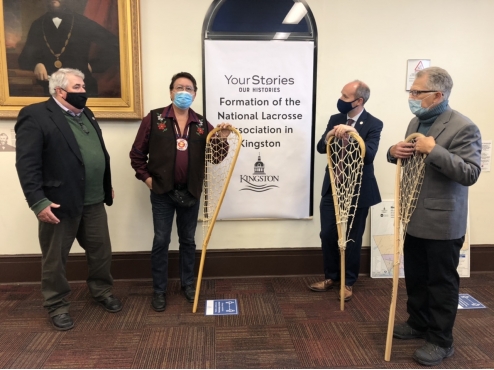 Kingston, ON—On Tuesday, November 17, 2020 the City of Kingston, Ontario, officially opened a display that commemorates the beginning of the modern game of lacrosse when the predecessor to the Canadian Lacrosse Association, the National Association of La Crosse, was formed.

On September 26, 1867, in the Council Chambers of Kingston City Hall, 52 delegates, representing 27 lacrosse clubs from Ontario and Quebec, convened to form the National Association of La Crosse. It was the first national sport governing body in North America dedicated to the governance of a sport, the standardization of rules and competition, and the running of national championships. Under the leadership of Dr. William George Beers, a prominent Montreal-based sportsman and dentist, the delegates drafted a constitution for the organization, adopted a set of rules for the game, and voted in their first elected officials. The formation of the National Association of La Crosse served as a model for the organization and administration of other sports throughout North America during the 19th and early 20th centuries.

The lacrosse display will be open to the public for the next year subject to COVID-19 restrictions. Lacrosse was represented by local Kingston Sports historian Ed Grenda, Mike Mitchell from Akwesasne, and Jim Calder from the Canadian Lacrosse Foundation.

“This organizational meeting in Kingston, Ontario was truly an historic event. It resulted in the establishment of the first sport governing body in Canada and provided the sporting community with the first set of standardized rules for the game. This organization, the National Association of La Crosse, went on to evolve into the current-day Canadian Lacrosse Association which continues to set the standards and provide the governance for the sport of lacrosse in Canada. We are pleased to work with the City of Kingston in recognition of this historic event,” said Jim Burke, chairman of the Canadian Lacrosse Foundation.

Founded in 1867, the Canadian Lacrosse Association (CLA) is the governing body responsible for all aspects of lacrosse in Canada. Our organization is comprised of 10 Member Associations representing nearly 85,000 individual participants, including coaches, officials, and athletes of all ages and abilities. The CLA's mission is to honour the sport of lacrosse and its unique nation-building heritage, by engaging our members, leading our partners, and providing opportunities for all Canadians to participate. The CLA oversees the delivery of numerous national championships and the participation of Team Canada at all international events sanctioned by World Lacrosse. The CLA is proud to be affiliated with partners that share the same vision and values, including our corporate partners - NormaTec Recovery Systems, Canadian Red Cross, Westjet, RockTape, OPRO and Baron Rings - as well as our funding partners the Government of Canada, the Coaching Association of Canada, and the Canadian Lacrosse Foundation. For more information on Canadian Lacrosse Association and the sport of lacrosse, visit our website at www.lacrosse.ca and follow us on Facebook, Instagram and Twitter.