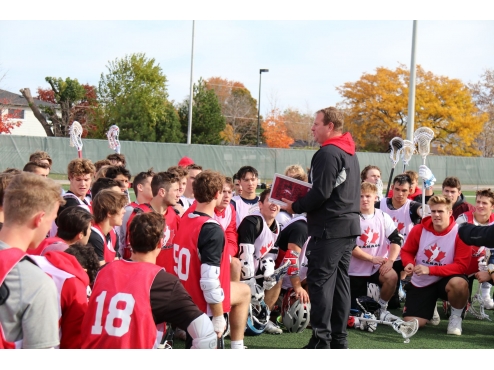 Ottawa, ON — The top 32 players moving on to the second evaluation camp for the 2020 Canadian Men’s U19 Field Lacrosse Team have been announced.

“After a highly competitive evaluation camp at the end of October, we have chosen this group of 32 players to move forward in our process,” said Matt Brown, head coach of the 2020 Canadian Men’s U19 Field Lacrosse Team. “All 73 players who attended the evaluation camp should be extremely proud of their efforts. They represented themselves and Canada well. This is a talented group and getting to 23 won’t be easy.”

During the first evaluation camp in the fall, 73 athletes from across Canada gathered in Oshawa, Ontario to participate in a weekend filled with practices and scrimmages. Over the three days, the Team Canada coaches saw tremendous effort and passion shown by the athletes.

A second evaluation camp will take place in the spring of 2020. More information regarding this camp will be released shortly. The 23 athletes selected for the final roster will represent Canada at the 2020 World Lacrosse Men’s U19 World Championship. This world event will take place in Limerick, Ireland from July 9-18, 2020.

Below is the list of the 32 athletes, in alphabetical order by first name, who will be moving on to the second Team Canada evaluation camp: