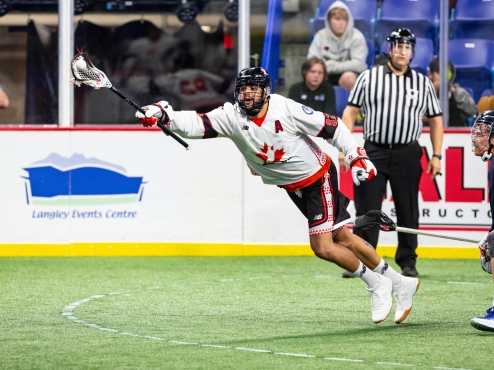 Langley, BC— Team Canada played their first game at the World Indoor Lacrosse Championship this evening in Langley, BC. Canada came away with a 16—6 win against Team USA in their 7:30 p.m. PDT game.

Canada’s Ben McIntosh, #90, scored the first goal of the game, assisted by #17 Curtis Dickson and #44 Dane Dobbie. While the USA quickly tied it up, #91 Robert Church, assisted by #32 Shayne Jackson and #42 Mark Matthews, scored for Canada. The first quarter ended with a strong lead for Canada 7-2.

Quarter two was a shutout for Canada’s goalie #45 Dillon Ward. Two goals for Canada were scored, with Canada leading 9-2. Canada sunk three more goals in the third quarter, with USA getting only one past Ward.

It was an exciting final quarter with the USA scoring two more goals and Canada maintaining their lead with four more points. Canada ended the game with a strong 16-6 win, with Matthews scoring three goals for Canada and Ward with a 86 save percentage.

“You’re bringing a bunch of guys together who haven’t necessarily played together, and the thing that stood out to me is they played an honest game. They played hard all the way through, no short cuts and they did the little things that we need to have success,” said Glenn Clark, head coach of Team Canada.

Clark said the unselfish plays of the Team Canada players stood out.

“From Dhane Smith chasing down the guy on a breakaway, to guys blocking shots and running to the bench to create transition—all of those smaller plays within the game are what you need to have success. All the little plays were really important to me as a coach,” said Clark.

Team Canada plays their second game on Sept. 20 at 4:30 p.m. PDT at the Langley Events Centre, in Langley, BC.

The complete match schedule, including playoff brackets, can be found here.