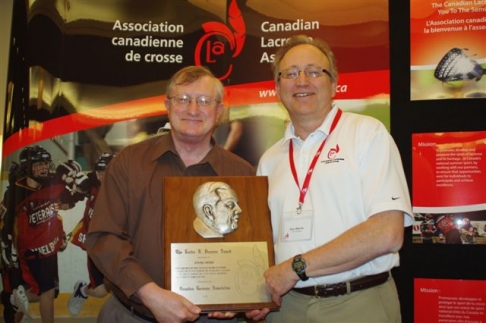 Ottawa, Ontario—1969 is year that John Herd picked up his whistle, once reserved for the sport of soccer, and put it to work in Canada's national summer sport. John became hooked on lacrosse that year and, as they say, the rest is history.

On May 29, during the CLA Semi-Annual General Meeting, John was named recipient of the Lester B. Pearson Award. The Lester B. Pearson award is presented by the CLA to an individual in recognition of outstanding contributions of sportsmanship and leadership in the game of lacrosse and to the physical and mental development of young Canadians through unselfish dedication as a volunteer.

It was unanimous that this year's recipient be John and during the CLA's Semi-Annual General Meeting he was presented with this prestigious award. John has demonstrated a love of lacrosse and his accomplishments over the previous forty-one years are enviable and undeniable.

To his credit, John has officiated in 28 national championships, including both box and field, he has reviewed virtually every rule change and handbook, manual or guide to be published about rules or officiating, he is the CLA's longest serving member on the CLA officials committee, he is a CLA Master Clinician and he was inducted into the Ontario Lacrosse Hall of Fame in 2006.

John has been considered by some as the ‘dictionary of lacrosse' and his knowledge and wit has gained the respect of all who come into contact with him.  It was with great pleasure that the CLA presented the Lester B. Pearson to John and publically acknowledged his contribution to our great sport.