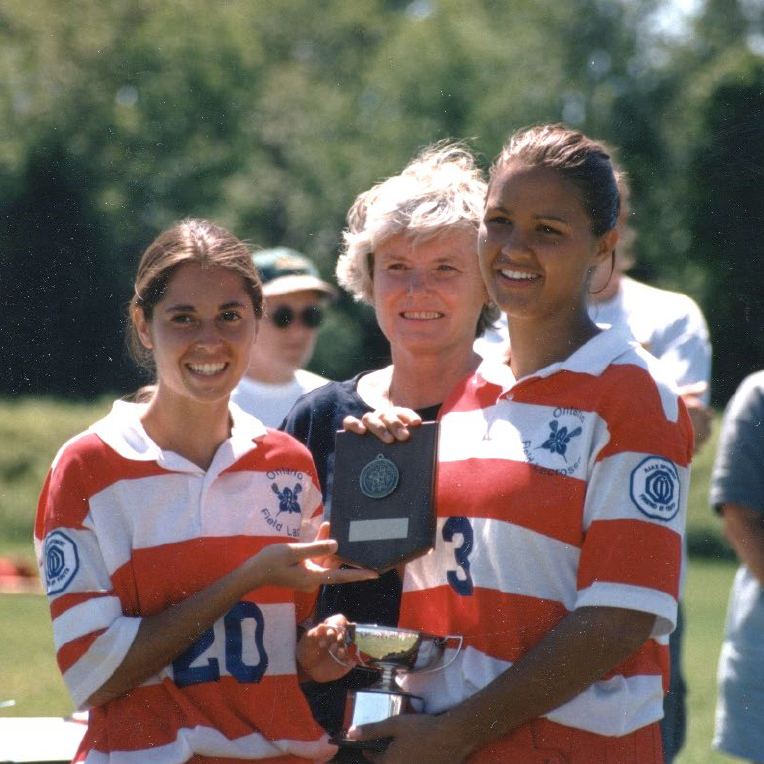 Ottawa, Ontario - February 22, 2021 - Jenny Kyle passed away on February 21, 2021, but she will be remembered by the lacrosse community as a humble, lighthearted, dependable and committed contributor who led by example and helped spur on a generation of young women’s field lacrosse leaders throughout Canada and beyond.

For those players who have had the opportunity to compete for the Canadian Junior Women’s Field Lacrosse Championship, you may have known the name Jenny Kyle because it appeared on the Championship Trophy, but you may not have known her story.

When Canada sent a women’s field lacrosse team to the inaugural World Championship in Nottingham, England in 1982, it lit the spark for the growth of the women’s game in Canada. The torch run began across Canada by two of our finest women’s lacrosse ambassadors. At the heart of so much of the groundbreaking activity after 1982 were Carol Patterson and Jenny Kyle.

It wasn’t just one thing that set Jenny and Carol apart, but the sheer determination to do as much as possible made their presence felt in all aspects of the growth of the game in Canada.

Together they travelled the country, not simply to help players learn the game, but to help organizations build their foundation by advising on the recruitment of coaches and administrators. Of course, an assist goes to Jenny’s husband Ferg, an Air Canada pilot, who helped make it easier to keep Jenny in motion.

The amount of effort taken to cover the country at that time cannot be underestimated. The return was monumental. From 1985 to 1987, the National Championships saw the greatest numbers of teams participating, unmatched still to this date. British Columbia, Ontario and Quebec were joined by first-time provincial squads from Alberta, Manitoba, Saskatchewan, and Newfoundland.

The contributions that Jenny made so selflessly over the years were no doubt influenced by her own life’s journey and personal struggles.

Born in Hong Kong, the daughter of a British soldier, Jenny, along with her mother, sister and brother fled to the Philippines, but were taken captive at the Los Baños prison camp when the Japanese took control. For three years (from the age of 3-6), they lived in cramped quarters with only meager rations of rice to eat, and guards who became increasingly brutal and would eventually make plans to kill them. They were released when the war ended. The family eventually settled in England and it was there that she learned to play lacrosse as a schoolgirl. She passed her love of the game on to her daughter, Liz, and her involvement grew as she travelled throughout Ontario to watch Liz play.

Her lacrosse stick made a remarkable return in 1981, 25 years after her school days, when she joined her daughter, Liz, to play for a season with the Mississauga Wings. “My muscles ached and I couldn’t walk for a week,” Jenny said after her first game, but with her usual wit she added, “... but the girls would always help me limp off.”

Beyond the 1980’s, while not as integrally involved, Jenny was always quick to jump in whenever help was requested. Fundraising was always a priority for the National Teams and whenever asked; she would not only attend and contribute to every event, she also joined in to organize as well.

In 1994, Jenny donated the Championship trophy to the Canadian Lacrosse Association to be awarded to the Canadian Junior Women’s Field Champions. The Kyle Cup was presented for the first time in 1995 in Oshawa, Ontario.

The Kyle Cup
(as written by Jenny Kyle)

My English grandparents, Arthur Henderson and Muriel Hanbury met on board a ship sailing from England to India in 1906. India was a British possession in those days and Arthur was a major in the 27th Light Cavalry, Indian Army. Muriel was on her way to visit cousins in India, closely chaperoned by her aunt. It was a whirlwind shipboard romance and they were married the following year and led the sort of existence seen in the movie, “the Jewel in the Crown.”

They were both keen tennis players, and in 1909 won a silver cup as second prize in a tennis doubles tournament in Bangalor, India. Sadly, Arthur was killed near Paris by a German sniper’s bullet in1914 (WWI) and Muriel died in England in 1948.

The cup gathered dust in my mother’s attic for 50 years. My mother (who was a lacrosse goalie in the days when goalies didn’t wear helmets because no shot over a goalie’s shoulder counted) was delighted when I asked her if I could use the cup.

Arthur and Muriel would be equally happy to know that their cup was back in circulation as a symbol of athletic achievement between Junior lacrosse teams in Canada.

Good luck to all who strive for it.