Road to Worlds: Alie Jimerson - More than a Game 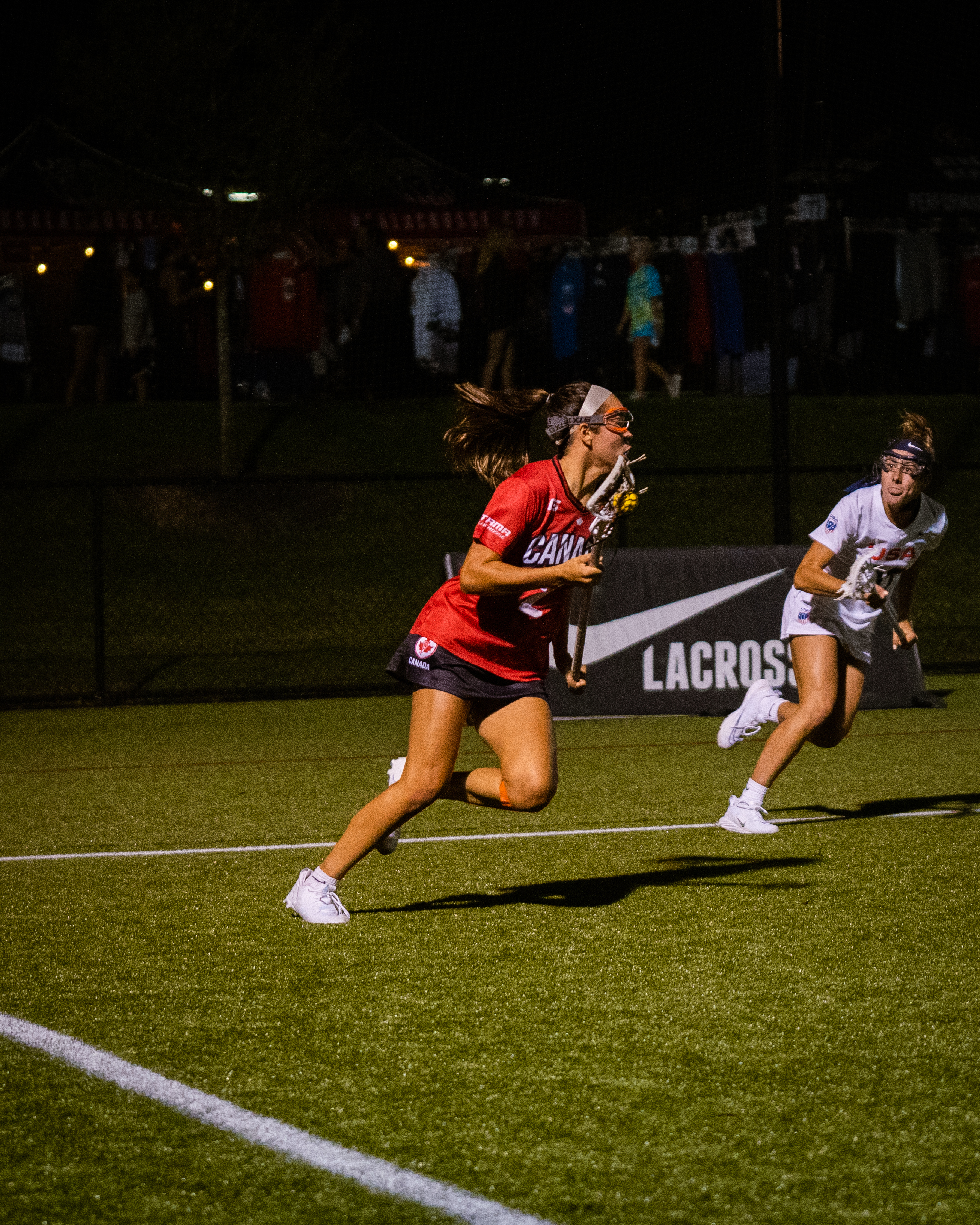 On National Indigenous People’s Day, we recognize and celebrate the unique heritage and diverse cultures of First Nations, Inuit, and Métis peoples.

Alie Jimerson, of the Cayuga Nation and an attacker on the Senior Women’s National Team, doesn’t play for the wins, the medals, or the goals (even though she’s exceptionally crafty at scoring them)—she plays for The Creator, the way the game was originally intended.

The Cayuga Nation is one of the six members of the Haudenosaunee confederacy, along with Onondaga, Seneca, Oneida, Tuscarora, and Mohawk. The first to play the Creator’s Game, they are the original inhabitants of the land now known as upstate New York, southern Ontario, and southern Quebec.

Growing up on the Seneca reservation, about 50 kilometers south of Buffalo, N.Y., Jimerson began to play lacrosse at age six. Her mother, Claudia Jimerson, coached and played for the Haudenosaunee National Team, and wanted her daughters to have the same experiences she did.

“I was on a little club team on the reservation, it was really small. I got to play with all of my friends growing up, and my mom and a couple of cousins coached us, and we’d go to tournaments and really had fun. I kept playing throughout the year instead of just summer, and every summer I’d be better and better. When I was 12 or 13, I started getting more interest from college coaches, not D1 but D3 and I was like ‘Oh, I could actually play in college,’ and I really wanted to play Division 1 and went from there,” Jimerson said.

And so, she did. After two seasons at the University at Albany, Jimerson transferred closer to home to Syracuse University, where she flourished and became a role model for younger teammates and young female Indigenous lacrosse players.

“In our culture, it goes against tradition for women to play lacrosse. But as the years go by and the game has changed so much, people aren’t as harsh about it. But when I started playing, yeah, I got a lot of backlash. I was really fortunate at the time to have parents who allowed me to play, who wanted me to play, because they didn’t believe I shouldn’t. My mom plays lacrosse, and she got a lot of backlash as well. So she supported me, she was like ‘if she wants to play, she can play.’ It’s a privilege to play lacrosse, I always believe that. I’m really thankful for every time I get a chance to play, because there are girls out there, Native American girls specifically, who have elders who don’t believe they should play.”

Next week, Jimerson will play in her fourth World Championship, her second with Team Canada. Her first two were played with the Haudenosaunee National Team, where after years of being coached by her mother, she was able to play with her.

“I got to play with my mom in my second World Cup, and it was such a unique experience. Nobody can ever really say that, and I’ll never forget that,” she said.

She loved playing with the team, and next week in Towson will get to see her sister, Jalyn, a midfielder at Syracuse University, play in her second World Championship with the Nationals.

But Jimerson was a member of the 2015 U-19 team, that was told two weeks before Scotland that they would not be able to attend as their Haudenosaunee passports weren’t recognized by the United Kingdom.

“We had a really good team that year, I really thought we could have medaled or had a top-five finish. It was really frustrating.”

So Jimerson made a tough choice, and decided to submit transfer papers for Canada before the next championships. For her, it was less about where she played and more about the opportunity to represent her people on the World stage.

“I want to play this game so badly. It was a gamble, because I had to transfer before I knew if I made the team, and once you transfer that’s binding, so if I didn’t make it I would have to stick with that choice. I knew what I was giving up, but I had to do it.”

Jimerson says she was lucky, coming home from the 2017 World Championships with a silver medal, but more importantly was to return with new teammates who support her at every step and welcomed her culture, and now she’s a senior on the team, looking forward to mentoring the next generation of women’s lacrosse.

“I’ve been the youngest on teams for so long, and now I’m one of the older players,” she laughs. “It means a lot, especially after that finish in 2017. This is a big one, and I’m just so happy to be here again.”

For now, she’s brushing up on her skills after a few years out of Syracuse, and looking forward to the future of lacrosse, especially the development of Sixes after last summer’s IOC recognition.

“It’s hard to explain, how it makes me feel. Lacrosse should have been there a long time ago. Knowing that this sport is something my people founded, and now it’s being recognized as a world sport by the Olympics. I don’t know where I’ll be six years from now, but to see it come this far and know we’ve played such a huge part in getting it there. I have younger sisters, and cousins, knowing we paved the way for them to possibly be able to play in the Olympics is such a cool feeling.”

But first, Jimerson and the rest of Team Canada have to make it through Worlds. Catch Team Canada back in action, and watch Jimerson dominate behind the cage, starting June 29th at 7 p.m. ET against Team USA at Towson University, or on ESPN and TSN.