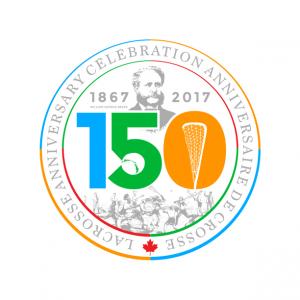 The 150th Anniversary of Lacrosse Celebration was a once-in-a-lifetime festival of activities that helped honour and celebrate the history and cultural significance of Canada's national summer sport, lacrosse. The celebrations took place June 16-18, 2017 in Montreal, Quebec, a city where the traditional game practiced by First Nations was adapted into a modern sport in 1867.
You can now re-experience this historic weekend through Our Country and Our Game: The 150th Anniversary of Lacrosse, a 30-minute video recap containing footage from the various events - a historical re-enactment that illustrated the transformation of lacrosse from a traditional game played by the First Nations to a formalized sport, a lecture series featuring prominent authors and academics, and a traveling exhibition of historical lacrosse artifacts and photos - along with interviews from various members of the lacrosse community.
The video will take viewers through an important celebration for our game. It not only provides a summary of the events on the weekend, it captures the thoughts of members of the lacrosse community on the importance of the sport to the culture and history of Canada.

Watch a pair of re-created games featuring authentic traditional sticks and wardrobe that helped illustrate the transformation of lacrosse from a Traditional Game played by the First Nations to a Victorian Sport formalized by the rules of Dr. George Beers.

Watch a series of lectures on a variety of lacrosse topics to learn more about the game and its rich history. These lectures were presented by a group of international authors and academics who have studied and researched the sport of lacrosse for decades.

Topic: History and Influence of Canada in the Worldwide Development of Women’s Lacrosse 1884-1924
Jane Claydon grew up in England and was introduced to lacrosse at Dartford College of Physical Education. In 1975, she was appointed Head of the Physical Education Department at St Leonards School, in St Andrews, Scotland, where lacrosse for women began in 1890. She has been a lacrosse administrator for over 40 years, which includes acting as the Director of the inaugural 1982 Women’s World Lacrosse tournament at Trent Bridge in Nottingham. Jane published the books St Leonards: Cradle of Lacrosse in 2009 and St Leonards: First in the Field in 2012, and also assisted Jim Calder and Ron Fletcher with research for the book Women Play Lacrosse. She is currently President of Lacrosse Scotland, a post she has held since 2008, and is also Chair of the Lacrosse Scotland Hall of Fame.
Presentation Slides - Jane Claydon (4562kb)

Topic: The Rise and Fall of Canada’s First Professional Leagues 1901-1924
Bruce MacDonald is a governor of the Canadian Lacrosse Hall of Fame and a historian, author and poet. He has published six history books, including Salmonbellies vs The World: The Story of Lacrosse’s Most Famous Team & Their Greatest Rivals and The Good Hope Cannery, three books of poetry, two books of short stories and poems in Canadian periodicals. He holds a Bachelor of Arts from the University of Victoria and an Master of Fine Arts in Creative Writing from the University of British Columbia. Bruce has taught at the University of British Columbia and the Ontario College of Art and Design and is a member of the Writer’s Union of Canada and the League of Canadian Poets.
Presentation Slides - Bruce MacDonald (2286kb)

Topic: The History of Lacrosse in Caughnawaga/Kahnawake and How the Warriors/Lacrosse Players Played a Significant Role in the Evolution of Turtle Island
Tewenhni'tatshon, also known as Louis Delisle, is a 2014 inductee to the Ontario Lacrosse Hall of Fame as a player and builder. He has been an educator in his community since 1975 after graduating from McGill University with a bachelor's degree in education. His experiences in lacrosse go back to the mid-1950s. He has had the benefit of hearing lacrosse history through the oral traditions of elders of the Six Nations Confederacy. He is still involved with lacrosse today, acting as elder advisor to the Kahnawake Survival School lacrosse team.

Topic: Before Beers: The World of Native Lacrosse in North America to 1867
Donald M. Fisher, Ph.D. is the author of Lacrosse: A History of the Game, a book published by the John Hopkins University Press in 2002, as well as Splendid But Undesirable Isolation: Recasting Canada’s National Game as Box Lacrosse (1931-1932), a lacrosse article that appeared in Sport History Review in 2005. He was a presenter at the 2014 Transnational Lacrosse Conference which took place in Nova Scotia. Fisher currently lives near Buffalo, N.Y. and is a Professor of History at Niagara County Community College.
Presentation Slides - Donald Fisher (5271kb)

Topic: History of Lacrosse on the Prairie

J. Alan Childs is a researcher and historian on the sport of lacrosse in the Midwest. His book “Minnesota Lacrosse: A History” focuses on the roots of lacrosse in the Ojibwe and Dakota communities up to the early Midwest lacrosse. Mr. Childs lives in Savage, Minnesota with his wife and five children who play, coach, and teach lacrosse at all levels.

Topic: The Significance and Cultural Role of the Game of Lacrosse (French Only)
Daniel Ferland holds both a bachelor's degree and master's degree in history from the University of Sherbrooke. His post-secondary research was centered on the sport of lacrosse and its First Nations origins. This historian has had an interest in the sport for quite some time, having played it for over 40 years. This has allowed him to see first-hand the evolution of in-game techniques and equipment, spanning from the end of the 20th century to the beginning of the 21st century.
Presentation Slides - Daniel Ferland (1483kb)