Canada’s Sports Hall of Fame is an international award-winning facility with over 40,000 square feet of inspiring experiences. Located at WinSport’s Canada Olympic Park, site of the 1988 Olympic Winter Games in Calgary, Canada’s Sports Hall of Fame features 12 galleries, more than 50 hands-on interactive experiences and a collection of 100,000 artefacts. Our mission is to share the stories of the achievements of our inducted Honoured Members so that we can inspire all Canadians to be the best they can be in all aspects of life.

The athletes and builders below have been inducted as Honoured Members to Canada's Sports Hall of Fame.

Date of Birth: May 5, 1843
Place of Birth: Montreal, Quebec
Inducted: 1979
Category: Builder
Often called the Father of Lacrosse, Dr. George Beers was the first person to codify the rules of this sport. A fine athlete, he was a lacrosse goaltender for many years before turning his talents toward organizing and popularizing the game. In 1860, he published a pamphlet outlining basic aspects of lacrosse including the size of the playing field, the number of players, the names of positions, the nature of goals, the definition of illegal play, and the duration of matches. In 1869, he further expanded his writings on the sport in a book entitled Lacrosse, the National Game of Canada. Adapted from an Aboriginal game referred to as baagga'adowe by the Ojibwe people, lacrosse gained popularity throughout Canada in the 1800s. Dr. Beers is also known for his significant influence on the organization and administration of sports in general. In 1867, he formed the National Lacrosse Association, a conglomerate of 29 clubs from Quebec and Ontario which has been used as a model for other national sports associations.
For more information on Dr. George Beers, visit his Honoured Member profile.

Date of Birth: December 1, 1946
Place of Birth: Six Nations
Inducted: 2017
Category: Athlete
Gaylord Powless was a Mohawk lacrosse player from the Six Nations of the Grand River First Nations Reserve near Brantford, Ontario, where the Powless family has lived for over 200 years. Gaylord received his first lacrosse stick at age two and by age 17, he won the Tom Longboat Award as the best Indigenous athlete in Canada playing the “Creator’s Game”, and carrying on an important family and cultural tradition. In 1964, Gaylord was recruited by the Oshawa Green Gaels junior lacrosse team, which he led to four consecutive Minto Cups from 1964 to 1967 and was chosen as the most valuable player in the series in 1964 and 1967. He turned professional in 1968 and went on to a successful career in professional and senior amateur lacrosse with teams in Detroit, Syracuse, New York, Montreal, Brantford, Port Coquitlam, Brampton and Six Nations. He knew where everyone was at all times on the field of play, was an unselfish player, and an outstanding playmaker. Gaylord's career was cut short by injuries and in 1977, he retired at the age of 30. As an Indigenous person, Gaylord had to withstand tremendous racism from coaches, players, fans, and sports writers. His reaction was to recognize that he was a target for bullying and abuse and to overcome it by being the best player, and the highest scoring athlete he could be. Sadly, Gaylord died on July 28, 2001, but his influence as a role model and inspiration to generations of Indigenous youth carries on.
For more information on Dr. George Beers, visit his Honoured Member profile.

Date of Birth: September 18, 1933
Place of Birth: Huntsville, Ontario
Induction: 1982
Category: Athlete
Jack Bionda was a lacrosse legend. Every year he played a full season, he won the league scoring title. Every time he changed teams, that team went on to the national championships. Bionda was not just an asset to, but the driving force behind, any team he played with. In 1954, his first season with the Victoria Shamrocks, Bionda won the league scoring championship and led his team to the B.C. championships. He repeated these feats numerous times over the course of his 23-year career with teams from Victoria, New Westminster, Nanaimo, and Portland, Oregon. From 1954 to 1968, Bionda played in seven Mann Cup finals and won five championships. He won the B.C. Senior A league scoring title seven times, his most impressive year in 1959 when he nearly doubled the points earned by his nearest rival. In 245 regular-season games, Bionda scored 515 goals and added 391 assists. Bionda was also a seasoned hockey player, playing for the Toronto Maple Leafs during the 1955 and 1956 seasons and the Boston Bruins from 1956-59. Playing NHL hockey, however, was merely an off-season pastime and source of employment, while lacrosse was his true passion.
For more information on Jack Bionda, visit his Honoured Member profile.

Date of Birth: February 20, 1888
Place of Birth: St. Catharines, Ontario
Induction: 1961
Category: Athlete
Before the onset of the First World War, lacrosse was Canada's sport. Matches turned into weekly summertime spectacles to which thousands of spectators would flock to the field to enjoy a picnic, listen to a live band, and cheer on their home team. In these golden days of lacrosse, Billy Fitzgerald stood out as a legend. Fitzgerald was a lacrosse prodigy from the start. By the age of 19, he was playing for the Senior Athletic Lacrosse Club in St. Catharines, by far the best club in eastern Canada. Fitzgerald joined the team in 1907, and for the two years he played with them, they did not lose a single game. Fitzgerald turned professional in 1909 when he signed with the Toronto Lacrosse Club. He returned to St. Catharines after the war and, in an attempt to revive interest in the game, organized a semi-professional Ontario lacrosse league. He then moved further into coaching and refereeing and found that his skills were much in demand. He earned prestigious positions coaching at Swarthmore College in Philadelphia and teaching lacrosse at the United States Military Academy at West Point. Fitzgerald later returned to his hometown to help the next generation of St. Catharines lacrosse players by coaching junior teams and refereeing in the senior amateur league.
For more information on William 'Billy' Fitzgerald, visit his Honoured Member profile.

Date of Birth: May 27, 1927
Place of Birth: Winnipeg, Manitoba
Induction: 1985
Category: Athlete
While Canada has produced many talented athletes, few can match Ike Hildebrand's claim to fame. He achieved national and international success in both Canada's national winter sport (hockey) and national summer sport (lacrosse) in a career that spanned more than 16 years. A native of Winnipeg, Hildebrand first rose to sporting prominence in the Mann Cup, the Canadian senior lacrosse championship that annually pits the winners of the Western and Ontario Lacrosse Associations against one another to determine the national champion. In some 16 seasons of competitive senior lacrosse, Hildebrand scored more than 900 goals and added over 700 assists. Thirteen times he was named to his league's all-star tem. When not playing competitive lacrosse, Hildebrand was an outstanding hockey player. He played junior hockey in Ontario during the late-1940s before enjoying two 30-plus goal seasons with Cleveland in the American Hockey League. Hildebrand played 71 NHL games over two seasons in the mid-1950s with the New York Rangers and Chicago Blackhawks.
For more information on Ike Hildebrand, visit his Honoured Member profile. 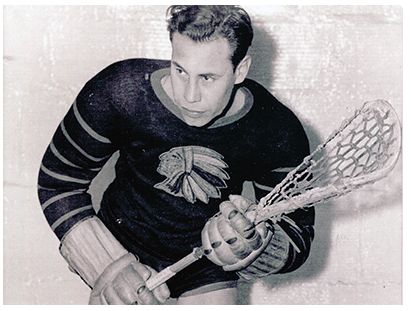 Date of Birth: 1914
Place of Birth: Six Nations Reserve
Induction: 2015
Category: Athlete
Bill Isaacs was an accomplished lacrosse player from the Six Nations Indian reserve.  He became renowned as one of the most outstanding lacrosse competitors during the 1930’s and 1940’s and a superstar of box lacrosse, the indoor version of the game.  He won the Ontario Amateur Lacrosse Association Senior “A” scoring trophy 7 times in 8 years between 1935 and 1942 as well as winning the 1938 MVP award. Bill was a member of two Mann Cup winning teams, the Mimico-Brampton Combines and the Hamilton Tigers, scoring a total of 777 goals and 467 assists in 346 games in his career. Bill is ranked 11th in senior Canadian and professional history. Bill retired from the sport in 1949 after 15 seasons to spend more time with his family.
For more information on Bill Isaacs, visit his Honoured Member profile.

Date of Birth: August 27, 1868
Place of Birth: Cornwall, Ontario
Induction: 1965
Category: Builder
Lacrosse was Joe Lally's life. Known variously as a father of lacrosse in Canada and "Mr. Lacrosse," he was involved in all aspects of the game and instrumental in the development of lacrosse as an organized sport in the first half of the 20th century. Lally spent his life in his birthplace, Cornwall, Ontario, where he was elected mayor in 1918. There he played and coached for local lacrosse teams. As a coach, he played a pivotal role in converting star Newsy Lalonde from goal to forward. But it was off the field that he made his greatest contributions to the sport he loved. In 1903, Lally took over the Cornwall-based lacrosse stick manufacturing business started by his brother Frank in 1881. Lally sticks were to become among the best-known lacrosse equipment in the world. Lally also made significant contributions as an administrator. In 1925, he was instrumental in establishing the Canadian Lacrosse Association, which made him a lifetime member in 1945—an honour that the Ontario Lacrosse Association had bestowed upon him in 1927.
For more information on Patrick Lally, visit his Honoured Member profile.

Date of Birth: July 27, 1879
Place of Birth: Belleville, Ontario
Induction: 1960
Category: Athlete
Jack Laviolette typified Canadian athletes of the early years of the 20th century. Like many of his contemporaries, he specialized in more than one sport—lacrosse and hockey, in Laviolette's case—and he rose to athletic prominence at a time when professional leagues were overtaking amateur organizations as the dominant form of sport in Canada. While playing amateur hockey in Montreal at the turn of the last century, Laviolette joined both the lacrosse and hockey teams of the Nationals club in Montreal who participated in local and national amateur competition in both sports. Laviolette and two other well-known lacrosse-and-hockey-playing teammates, Newsy Lalonde and Didier Pitre, were the mainstays of a strong Nationals squad. In 1910, the team travelled to British Columbia in an ultimately unsuccessful challenge against the New Westminster Salmonbellies for the Minto Cup. Inducted into Canada's Sports Hall of Fame for his contributions to lacrosse, Laviolette is equally remembered for his hockey career. In 1909, a new professional hockey league—the National Hockey Association, precursor to the NHL—was formed. Laviolette was enlisted to play for, as well as recruit and manage a new club, the Montreal Canadiens. He spent nine seasons playing for the Canadiens—in both the NHA and NHL—alongside lacrosse teammates Lalonde and Pitre. In 1916, he was a member of the Canadiens' first-ever Stanley Cup-winning team. For his role in founding the NHL's most successful franchise, Laviolette was inducted into the Hockey Hall of Fame in 1962.
For more information on Jack Laviolette, visit his Honoured Member profile.