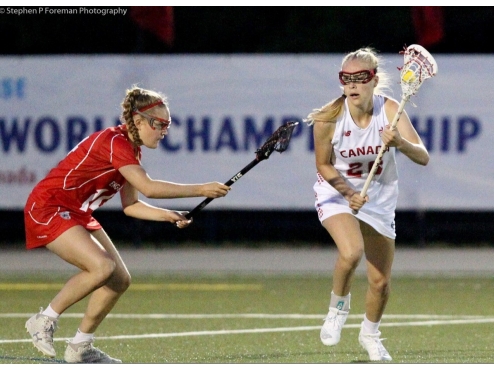 Annabel Child's tryout experience was different than most of the other girls who were aiming to be on the current U19 Canadian Women's Field National Team. Prior to the tryouts, she had a serious injury that resulted in her being unable to attend the first two evaluation camps. Instead, she was invited to be evaluated alongside the other 25 girls who were invited back for the final evaluation camp in June.

"I was extremely lucky to be invited to the training camp in June," she stated. "Team Canada so far has been an amazing experience and I am so grateful and honoured to have made the team."

This strong chemistry is something Annabel has felt growing between the players on the Team Canada final roster for the Women's U19 Field World Championships that are now taking place in Peterborough until August 10.

"It's a really great group of girls and we have quickly bonded both on and off the field," Annabel said. While most of the girls got to know each other during the three evaluation camps, Annabel only attended one camp, and therefore only had one opportunity to meet her new teammates.

Annabel also believes the coaching staff for this U19 Canadian team have played a large roll in the development of chemistry on the field.

"The coaches have done a really amazing job of creating a strong team atmosphere," Annabel emphasized.

As the World Championships continue, Annabel is looking forward to becoming even closer with her teammates while defending the 2015 gold medal in front of a home crowd. She is also looking forward to meeting players from around the world.

"I'm excited to play with and against some of the best players in the world and to meet and interact with players from other cultures," she explained prior to the Opening Ceremonies that took place on Wednesday July 31st at 6pm.

Before making Team Canada, Annabel said her most memorable lacrosse moment was winning Nationals with Team Ontario last summer. She played in a final game against Alberta that was very tight, but her team was able to pull through by working together and for each other.

After the completion of the U19 World Championships this August 2019, the midfielder has one more year of high school and then will play at Harvard University. While in university, she wants to make a positive impact on her team and to someday represent Canada at the senior level, hopefully in the Olympics.

Until then, Annabel will get a taste of how it feels to be a part of Team Canada for the rest of this week, something she has wanted for a long time.

"Putting on that Team Canada jersey and representing my country is something I have dreamed about doing since I was young."